Before jumping into my thoughts on A Quiet Place, I want to start this piece by admitting I’ve been selfish and subsequently apologizing for it. I’ve been watching watching watching, and have been hoarding my thoughts on many wonderful, and not-so-wonderful films I’ve seen over the last few months. It seems fitting that this review would knock the cobwebs off of this site and bring me out of my very own quiet place.

A Quiet Place is a genre-flipping cinematic experiment with an intensity that burns furiously on-screen, and acts as an endurance test for every viewer sitting in the theater. The film’s main thrust, sound of any kind being a liability in this post-apocalyptic world our characters inhabit, allows Jon Krasinski to experiment and toy with Film’s primordial function as a visual means of storytelling. With this the film finds great success.

No title-cards or scenes that explain away the context of the film. We are only informed that it is ‘day 89’, before Krasinski stimulatingly throws the audience into a clearly doom-laden world. The next crucial detail becomes apparent immediately: silence equals safety. We start with a family in a dilapidated pharmacy. The mother (played by Emily Blunt) quietly and carefully searches a cabinet with strewn-about bottles of prescription medication while her son (played by Noah Jupe), on the floor visibly stricken with flu-like symptoms, quietly shivers. The strings of suspense tighten as we get quick cuts of little feet darting through the aisles introducing us to the youngest child in this family. Finally, we see the oldest sister (played by Millicent Simmonds) as she sits down with youngest brother who is now using chalk to draw a rocket on the floor. Using sign language, he says the rocket will be their escape from this world and the monsters that inhabit it. Before the family heads home from their scavenging mission, the youngest child takes a toy from the pharmacy and, of course, it’s a toy that makes noise. Through this noisemaking toy we are introduced to the fatal dangers that the slightest noises pose in this world before we jump to a year later, day 472, where the remainder of the film plays out. 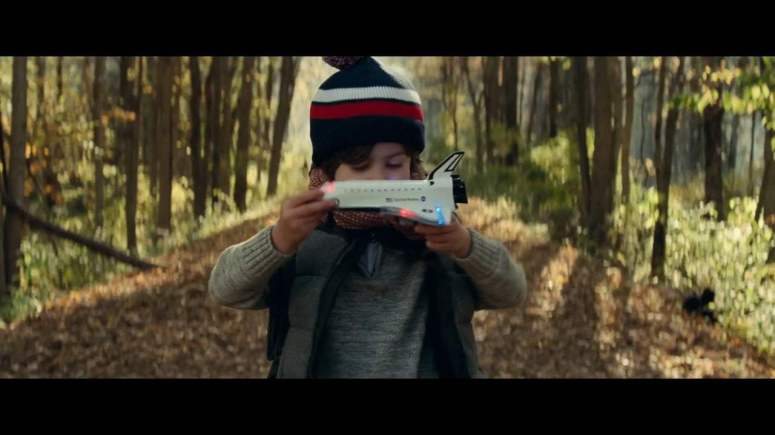 The script, written by Krasinski, Bryan Woods and Scott Beck, doesn’t waste a single visual beat. But what is perhaps the biggest accomplishment of A Quiet Place lies in Krasinski’s pulls-no-punches decision to really play into the film’s central dilemma-noise being dangerous- while at the same time showing incredible restraint. Monster’s using sound to hunt their pray is not a new invention in cinema by any means. One just has to look at films like Alien, Jurassic Park, Attack the Block, and many more to find classic cinematic moments of suspense in which that same narrative tool is employed. None of this is lost on Krasinski who manages to pay homage to classics while treading new ground at the same time. The film avoids being corny which, I have to say, would have been an easy pitfall for this film to find itself in. A Quiet Place avoids this by keeping the script tight, and because Krasinski understands that the film isn’t about cheap scares, proper time is dedicated to ensure the audience relate and empathize with the family at the film’s center.  You will be surprised to find yourself tearing up more often than you find yourself afraid. Interesting character arcs and clever world building envelops the viewer and holds them tight in the film’s grace, so much so that even when it’s apparent you’re being toyed with, everything lands as intended. Krasinski tests the audience’s ability to act as an active participant in the film watching experience. Without overdoing it, he sets up the visual cues and makes us wait patiently, and sometimes excruciatingly, for their inevitable impact, like a nail sticking out of the floorboards or a kitchen timer slowly ticking away as the monsters approach. 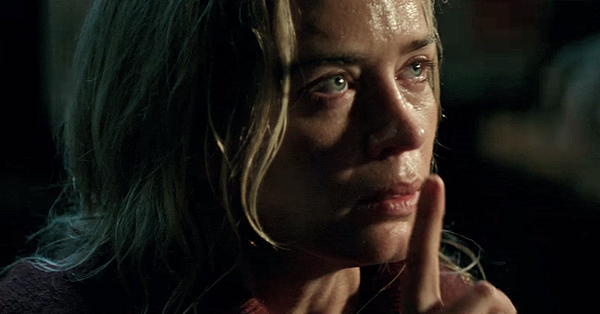 The score, composed by Marco Beltrami, is beautiful and gripping but perhaps too often employed as a scare tactic in a film that otherwise shows great control. However, with a film as structurally sound, well-paced and tightly wound as this one, you’d be doing yourself a favor by seeing it in a packed theater. And the last shot, along with recognizable sound that accompanies it, will get your blood pumping, further driving home the fact that this is not a monster flick about running and hiding, but fighting and surviving.